For our last day we went outside the city to Hang Dong for the Chiang Mai Grand Canyon. A Thai colleague mentioned this when she visited Chiang Mai.

The Grand Canyon is a manmade quarry turned water attraction. It’s 40 minutes away from our place (we were near Chiang Mai University). We hired a red taxi who waited for us and dropped us back to our place. I think it was THB 600, same price as when we went to Doi Suthep.

There’s an entrance fee worth THB 50. More than cliff diving, there’s actually a lot to do such as the shooting range, a zip line, a massage, and swimming. There’s also a really goo restaurant inside which gives you a good view of the place. The food runs at about THB 120 to 200, so pretty cheap.

I don’t think the place is that much famous within Thai people because it was filled with white tourists when we went. Maybe because we went on a Monday and it didn’t seem like holiday season for Thais. But when I read other blogs too they also mentioned the lack of Thais in the place. 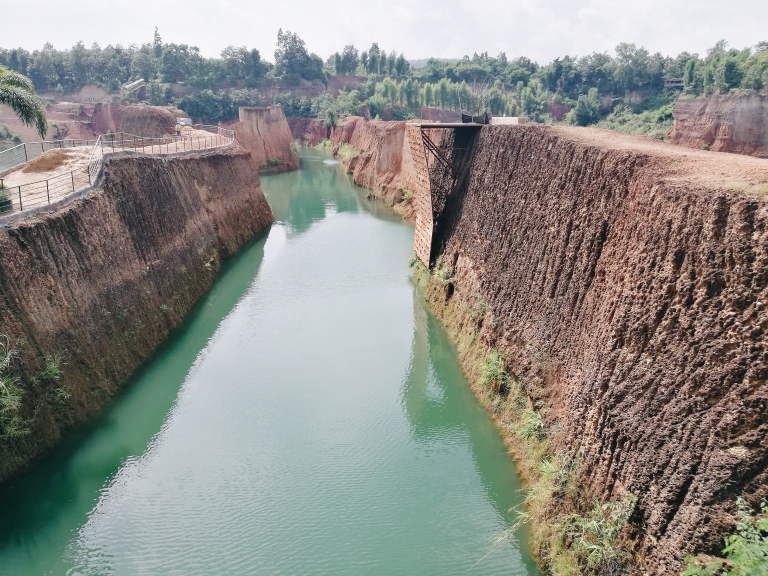 Besides eat, I didn’t really partake in what the place has to offer. My companion did the zip line and the cliff diving. The zip line had a THB 300 fee.

There has been a lot of news and stories regarding accidents in the cliff diving, but I think that’s mostly due to carelessness of the divers themselves. There are lifeguards in the area before jumping, and they don’t just let you jump right away. I’ve also heard the lifeguard have to shout and remind one of the swimmers below to wear their life vest. I guess due to the accidents in the past they’ve raised the bar in terms of safety and security. There’s an area that I walked to which had a sign of no diving allowed as it’s probably too high.

We spent a good two-three hours in this place. I waited while he did all the diving, swimming, and cliff diving. It’s actually a really chill place that’s nice to hang out. You can easily let time take its course when you go. We left the place by four PM and got back in our AirBnB by five.

It was also our flight back to Bangkok this day. Our flight was at 8 PM so we needed to leave by 5 or 6 to anticipate the traffic. The uber we rode to the airport was a really nice and friendly guy. I thought it would be a little hassle to do our check-in and all that (cue the trauma of PH airports) but it was really fast. There was a sudden downpour of rain and it caused a bit of delay on our flight.

Our flight back is still via Nok Air. We rode an old plane going to Chiang Mai, but back to Bangkok we rode what seemed a brand new plane. On our short ride back it wasn’t really raining but the flight was a little bumpy. There was one part of the flight where it felt like the plane was going all the way down (and we’re not yet due to descent) which was a little scary but I still enjoy bumpy flights because they help me sleep easily.

My favorite part about this trip is the number of times I got mistaken for Thai. I mean yes, Filipinos do look Thai, but it’s never been an issue in my former travels. When we were getting a taxi from the airport, the lady mentioned saying I look Thai and then when I was checking in for our flight back to Bangkok, the lady at the counter kept on saying something in Thai which I couldn’t understand. It’s both amusing and cute that they think so.

I’m definitely going back to Chiang Mai. I love the peace and the whole atmosphere of the place. It’s hard to describe exactly but the closest word is probably “charming”. We didn’t interact much with the locals but I felt safe the whole time I was there. There’s still a lot to be discovered and so there’s plenty of reason for me to go back. Staying a bit outside the city was a good choice, except that we never really figured out how to go to the center of the city with just riding the red taxis. We keep taking an uber. I know it’s easy to flag down red taxis but I don’t think we saw plenty where we stayed or we just didn’t know. Communication will be a bit limited because the people don’t speak English too well. However, if you have a map and can show them the name of the place, they would understand. In the two times we rented a song thaew, we had to show the driver the address of the place and then they will take a piece of paper and write the price. Haggling will be a little difficult due to the language barrier but if you’re persistent I’m sure you’d be able to do it!